This is the place for questions about things electrical and mechnanical...or any other automotive-related hardware issue.

Background: 460 swap into a 1998 Mustang GT. Car was originally a 4.6L/ manual trans car. The goal for this car is to be the 460 powered Mustang Ford should have built back in 1998. I want to keep all the amenities, AC, PS, PB, etc fully functional. I was going to run a C6, but changed my mind and now I am going to use my E4OD. It's a bit bigger and heavier, but has that wonderful 4th gear and it is in excellent mechanical condition. (was previously in my '73 Ford truck). Now that most all the fitment and accessory drive issues are straightened out, I am to the point in the project that I need to start thinking more seriously about the engine management end of things.

Up until a few days ago, the plan was to utilize the stock Mustang EEC-V (BAI1 code) to control everything. That plan got tossed up in the air when I was cruising FB Marketplace and ran across a a KILLER deal on a complete Mass-Flo efi setup for a 460. It is the older version (Ford A9L mass air EEC-IV based) but is a brand new, COMPLETE kit. Converted Torker II manifold, fuel rails, 30lb injectors, 1000 cfm 4bbl throttle body, wiring harness, ECU, Baumann Optishift E4OD controller, Mallory Comp 9000 distributor, Mallory Promaster e-coil, remote 80mm Pro-M MAF, air filter, and an aluminum throttle body hat. I know Mass-flow has a sketchy reputation, but it should be close enough to make it run.

I am probably most excited about the Torker intake and the E4OD controller because these were two things that I really wanted, but felt were too expensive for the initial scope of this project. The added bonus is that the intake will allow me to use 'regular' 460 heads thereby making future upgrades quite a bit easier.

Now for the options:
A. Tune the stock EEC-V for the 460 like I originally planned. This would keep the DIS and all the peripheral stuff the EEC-V a plays a role in controlling. Caveat: EEC-V is a bit more complicated for a guy used to Megasquirt and the ECU would have to be configured for this engine. I would likely have to outsource the initial start-up tune.

B. Pop the whole Mass-Flo setup in there since it is already configured for these injectors and MAF an a 460. Unless I converted it to use an EDIS8 module, this would require a rethink of my front accessory drive because the alternator is currently occupying the distributor space. The cam position sensor I assembled I believe is the correct style for the EDIS8. (1996 Explorer based) Not sure if it will work with this EEC-V or not. Caveat: I would have to run it as a piggyback or find work-arounds for the electric fans, 2 speed fuel pump and whatever needs an input that the EEC-IV does not support.

With either setup I figure a QH and the supporting software is an absolute necessity.

Oh I forgot, C. Ditch it all for an aftermarket ECU haha. 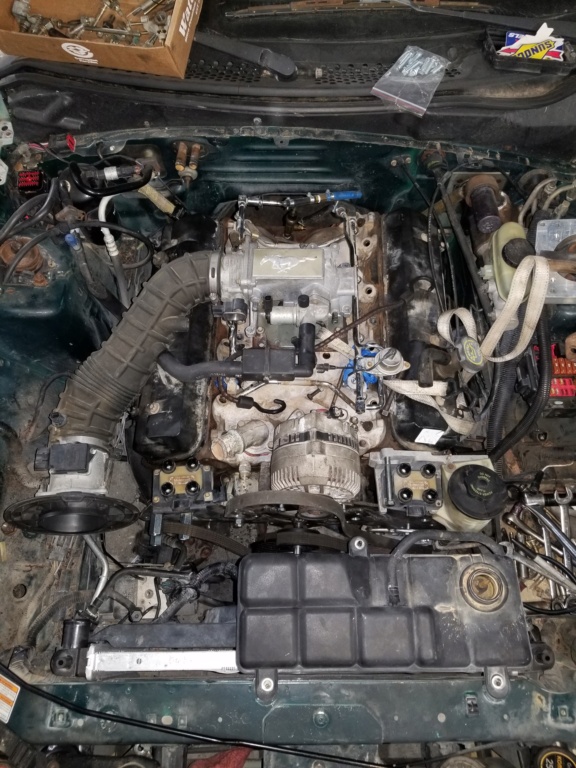 Ok so I will update this with a little more information since it all arrived in the mail today.

First off, dang this is nice stuff. I don't deal in brand new stuff very often so this really is a treat.

Second, the Mass-Flo kit comes with a relay box that has AC cutout at WOT, electric fan control, fuel pump and eec power so those potential problems are solved.

The problem of distributor vs alternator is far from solved though. I can either relocate my alternator mount or set this thing up for EDIS. Changing the alternator location will open a big bag of worms I am afraid because it took me quite a while to get the FEAD figured out and fabricated.

Decision made. Not that anyone is reading this. Lol.

Stick with orig plan of using the EEC-V. There are just too many hoops and compromises associated with using the IV. The whole Mass-Flo setup makes sense for a carbureted car changing to efi but little sense for this 98.

I will use the intake, rails, TB, carb hat, mass air meter and Optishift on this car and save the ecu and harness to maybe convert our 83GT (302 blow thru turbo) to efi. Or just use the harness with the Megasquirt that is already in the car. (Used for programmable ignition and data logger.)
1983 Mustang GT 552/C6 - 10.18 @ 133
Top

My buddy is looking to get his GT project he'll probably interested. It needs some TLC though. Got to finish first the installation of the shocks and bumpers from 4Wheelonline onto the Wrangler before we can take a closer look.
Top
Post Reply
4 posts • Page 1 of 1

Users browsing this forum: No registered users and 15 guests