... the one stop site for EEC tuning information ...

Anything about Ford EEC tuning. TwEECer and Moates questions dominate, but there's some SCT and OBD-II knowledge too.

i understand a few things about tuning but alot of it goes over my head. and the stuff i do understand doesnt seem to work out at all. i tried alot of things but i jsut cant get good results. think im about to throw in the towel but maybe i jsut need some advice. i drove around from 11pm till 4am last night datalogging, tuning, testing, repeating. yet i made almost no progress other than rigging a tune that seems to respond only alittle better than the factory tune.

so i recently just replaced my old FRPP 42lb EV1 injectors with some new genuine Bosch 42lb EV6 'Green Giants' (0280155968). i had reason to believe at the time the old injectors were not flowing evenly and thought the EV1 were too slow responding for idling being such a big injector. turns out it made no difference at all. but at least i know they are new and genuine and i still have the old spare for my next project. i have the flow sheets here for them. i am running at 35psi they are apparently almost exactly the same specs as the old FRPP injectors
http://i48.tinypic.com/2u76c9i.jpg

i have my MAF flow sheet here 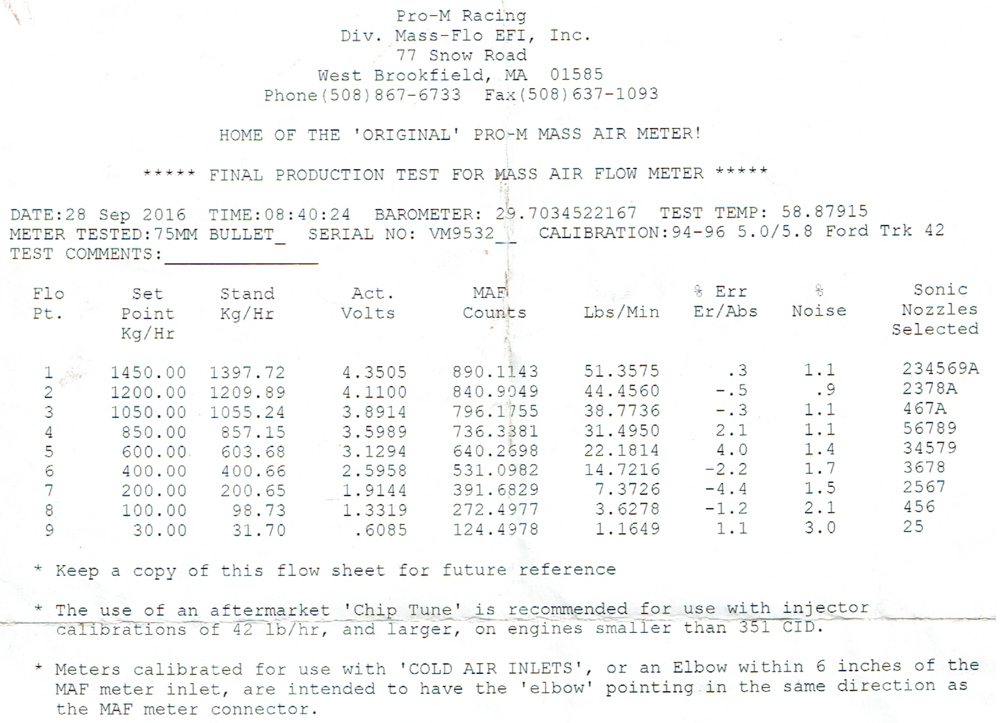 biggest problem is when i enter them in the tune. the truck runs super rich. the datalog shows both the long fuel trims pegged at -25% trying to lean it out. i do not have a wide band sensor so im trying to jsut do what i can. i try running the datalogs with EEC Analyzer and the MAF curve is all over the place and unusable. my vBat datalog is also unusable reading 45v so i cant really use EA to adjsut the injector offset or PW vs Fuel Trim. when i do PW vs Required, it wants me to enter in basically a 84lb injector which seems ridiculous. as an quick improvise, i multiplied the injector high and low slope by 1.25x figuring it would be a starting point since fuel trims are -25%. i dont really understand high and low slope, but the injectors are rated at 53.75 high and low of 57.5, i did not adjust those for 35psi fuel pressure but it does actually seem to work very well and now the fuel trims are much more manageable. the engine no longer pings when cruising when it use to be really bad and the

how important is the cam specs to enter? this seems to be the most successful thing i have done soo far and has helped help eliminate pinging even from the stock tune which would ping bad. but alot of the info filled in and estimated seems kinda excessive of being at 400 to 500 being average and some even higher up till 600. i have the timing event on the exhaust closed and all the specs for the cam done. when factory is between 280 and 316, im wondering if it might be hurting as well as helping. would hate if its firing injectors soo late that its going for the next combustion

as for mapping, i really dont know where i would enter some of these. such as spark

Re: think i need help with tuning.

I know it gets frustrating but it doesn't have to be as difficult as some make it out to be. I myself have gone through all sorts of different attempts to get things to work together and have discovered there is very little that's needs changing in a stock tune. I will throw out to you what I find the easiest way to get going......everything after that you can consider fine tuning.

First....I write a stock tune with only changes for removed hardware and change in CID. I will leave injectors and Maf stock with the exception of making sure to zero the minimum MAF Volts the ECU considers it to have failed and to add a couple of data points down low in an attempt to get idle rpm as low as possible. Something like this.....this is the GUFB A9L on right and somewhat adjusted on left for 42# calibration.

Re: think i need help with tuning.

I load up that tune and attempt to fire the engine....it may not fire right away. If putting your foot to the floor on the throttle helps...you will need to reduce Cranking Fuel. If it starts and runs rough or chokes and dies, you need to figure out which way to adjust the MAF until you can get it to idle on its own.

Once it idles on its own I begin with logging a slow steady free rev up to around 2000 rpm. Run that through EAs MAF calculator but instead of taking what it spits out and putting it into the tune.....I look at the average percentage of change and apply that to the entire MAF kg/hr in the tune. Reason being, it will change for running conditions so no sense spending a lot of time on it free revving. I load the new tune with the MAF adjustment, log another free rev up to 3-4000 rpm and repeat the adjustment process. Once I'm confident that my curve will get me around the block.......I go for short gentle ride, no need to go WOT yet....you work up to that. Review your datalogs and adjust as needed.

Since your trying to do this without a wideband....you need to stay closed loop as long as possible and you need to disable Adaptive Learning. When you run logs through EA you can select "wideband correction" hit "calculate" and enter 14.64. This will get you close but does seem to take longer without actual WB feedback. For your high load openloop conditions....you really need a WB otherwise your relying on a hope and a prayer.

Once you have a fairly accurate MAF curve you now go in to correct LOAD.. you will notice its been running low. That's OK...it helps keep you in closed loop. There is a couple of ways to correct this....I prefer to scale UP otherwise its a lot more work. Its as easy as multiplying your MAF kg/hr, High Slope, Low Slope and Breakpoint by the same percentage. So for 42's multiply by 2.21 (ive found 2.1 works well) and your load numbers should align with the rest of the factory tune making it easier to see where things need tweaking.

As for your question about CAM specs....I have mine set to factory specs....its user preference, I feel its better to fire early unless you need help for emissions or trying to get rid of an idle fuel smell.

I am not quite sure I would run garbage 87 octane with your engine combination. Are you using a wideband to tune? Keep in mind any time you make fuel or maf related changes with adaptive learning enabled, you MUST clear the kamrfs after making the changes and writing them to the hardware..If you are using a properly calibrated maf for your set up, there is no need to change the fuel injector slopes, breakpoint, offset or maf curve.
1992 Mustang LX - 25.1c Chassis, Vortech Blown Dart 332, Lentech Trans, TRZ Backhalf, A9L using A9P Tune, Moates QH/SL v1.9, BE, EA, TunerView
Top

havent been driving the truck much. but i been doing some datalogging and combining them into a big log which has been working better in EA. now when it adjsuts the MAF curve its something more reasonable at least.

i dont know where 'adaptive learning' is to know if its enabled or disabled.

i cant easily install a wideband because the crappy 'exhaust' shop who did the exhaust put the cats directly after the collectors. i already have the o2 sensor there. biggest issue is the exhaust is made in a way that its channeled inside the frame and i have no way to remove it without a sawzall. im thinking i need to cut it all out and redo it, but i only have a stick welder and i dont have the skill to weld exhaust with it. i already tried when redoing the tailpipes and i kept burning holes though it.

this was the shops idea of "it turned out well" when i asked for dual 2.5" in front of the tire

i ordered 2 cheap 2.5" Walker tailpipes and welded them in. couple weeks ago. but like i said stick welding is not good for exhaust

Resurrecting a dead thread because I caught an error.

Kingfish, the injector data you are using is incorrect. That is for the 0 250 150 558. I have seen this floating around the internet as well. However, the data sheet from Motors looks like it was copied, exactly, from here: https://performanceparts.ford.com/parts ... 3-f302.pdf.

You can see there are some pretty significant differences between the two:

I have attached a spreadsheet with the data for all Bosch injectors. But, it doesn't have the injector parameters you are looking for.

I am starting a thread on this to see if anyone has the calibration summary (i.e., AHISL, ALOSL, et cetera).

Be well, and have a great day!
Wayne