Background: Stock 1996 7.5L/ E4OD (w/ Punisher VB) combo swapped in a short bed F100 with crown vic front end. 9" diff 4.30 gears. Currently runs and drives fine. I love having overdrive. Fun truck to drive, but like all projects, I am going to upgrade it somewhat.

It has a SD48E computer ALT0 code.

The stock 460 short block will be going away. In it's place will be a 552" short block I have along with either a single HT60 turbo or a couple of GT45's. 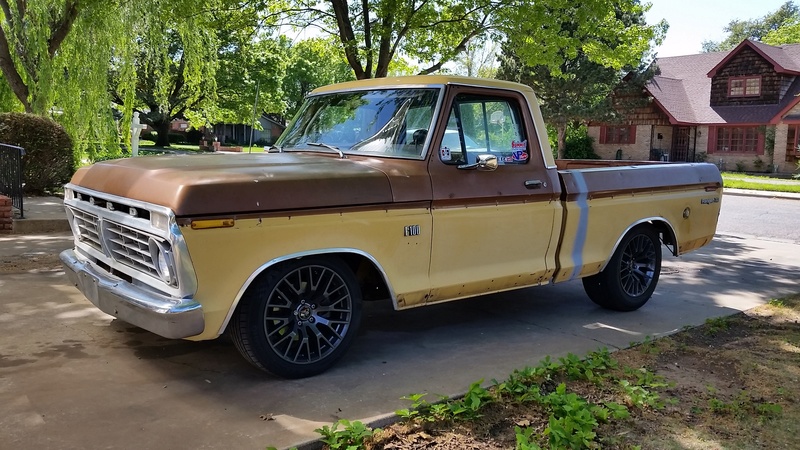 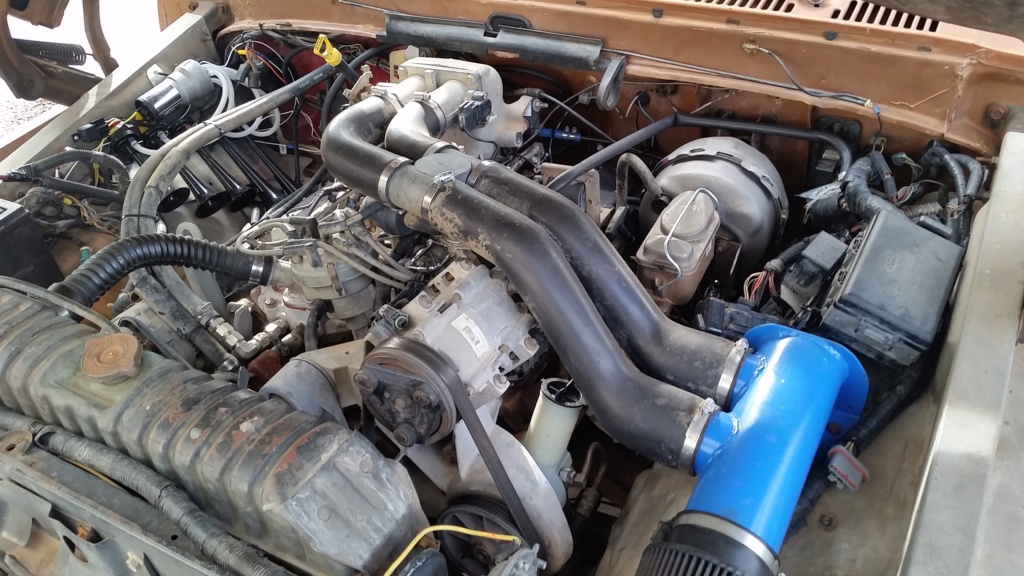 Now for the advice part.

A. Stick with the current EEC-IV and tune the engine and trans with a Tweecer or QH and hope it plays nice with forced induction. (10-11 psi projected)

B. Buy a standalone E4OD controller, and use the Megasquirt (v2.2 board xtra code loaded) I already have. I was previously using it on with the 552 for distributorless ignition control only. Worked fantastic.

I don't have a specific suggestion which way to go on this one, but I do have a question that's related to your current setup. It's 1996, yet it's EEC-IV? Is it OBD-II? Just looking at pictures on the Internet, it appears the 1996 7.5L was TFI-ignition. I'm asking because another person has a question about putting a 351w in a BMW and doesn't want to go coil packs, but DOES want to maintain the OBD-II connection for emissions purposes. If a 96 F-series BigBlock EEC does that, then this may be what he's looking for.
...Always Somethin'

A vs B, how do you want to set/control boost.
Cheers

cgrey8 wrote: ↑Mon Jul 02, 2018 2:36 pm I don't have a specific suggestion which way to go on this one, but I do have a question that's related to your current setup. It's 1996, yet it's EEC-IV? Is it OBD-II? Just looking at pictures on the Internet, it appears the 1996 7.5L was TFI-ignition. I'm asking because another person has a question about putting a 351w in a BMW and doesn't want to go coil packs, but DOES want to maintain the OBD-II connection for emissions purposes. If a 96 F-series BigBlock EEC does that, then this may be what he's looking for.

FYI I am JP3 from various Ranger forums dating back to Kunz Korner. I have not been very active on the them in some years since selling my last Ranger.


Boost will just be set with regular ole waste gates. No fancy stuff.

I have ZERO experience with Ford SD systems. However from what people say about them, they are a pain to deal with...enough so that people routinely convert from SD to MAF to escape them. I wish I had the experience of using them to talk intelligently about what it is, exactly, that makes them so bad despite the science and practice of SD-based fuel calculations being quite accurate in other applications.

My best interpretation of the downfalls of Ford's implementation of SD on these older EECs is that the resolution of the MAP sensor is just simply not granular enough to be useful at higher loads and in the case of boost, I don't think the stock sensor or EEC support positive pressures at all. I've heard of guys using Ford EECs installing GM 3 bar MAP sensors to allow them to datalog positive manifold pressures. Although I can't recall ever reading a thread where a GM 3 bar MAP was connected to a Ford EEC for fuel control...they are only datalogged.

So if you were going to attempt boost with a Ford SD computer, my guess is you'd have to do it mechanically using an FMU. So once you approached the 60-70% Load range, the EEC would have to be set to go Open Loop and let the FMU take over. At that point, you've blended computer control with mechanical carburetor-like fuel control...which would be giving you only crude fuel control at best. In my mind, either a MAF conversion or MS solution would be preferable. But, again, I'm saying this having ZERO experience with big blocks, Ford SD EECs, boost, or MS systems. So my thoughts on the matter are not to be highly coveted.
...Always Somethin'

That's the info I wanted to know. I was afraid the stock SD map sensor might be an issue so that's the little push I needed to flop to the MS side.

I'm not interested in using an FMU or hacking some sort of bleeder in there.

I just wish the MS would control the E4OD! I have not found anyone who has successfully use MS to control it. Or more specifically control the EPC that sets the trans line pressure. It is a current based deal unlike other brands (and later Fords) that are PWM controlled.
1983 Mustang GT 552/C6 - 10.18 @ 133
Top

BBR wrote: ↑Tue Jul 03, 2018 9:06 am I guess my question really is: Is this speed density EEC going to be a big enough pain in the butt on boost that I would be better off just using the MS?

SD and boost without a MAP to read boost is not going to work.

The only boost reading MAPs I know of are, one for the cossie and another for the powersmokes.

The EEC EsCos one from GGR in the UK goes up to 1.5 bar boost.

The diesel powersmoke one is clipped at the low end so not much good for SD.
Cheers

Even if he has a boost capable MAP, the bin would need to patched with a re-direct and a new Map Transfer table. The stock calibration won't allow enough resolution. You other option would be a frequency converter tied to the Map output to fool the ECU into operating within it's limits. Similar to the idea of a calibrated Maf.

All the SD bins only 8bit MAP results?
Cheers

I really don't know. Had a quick look at GUFB ....ya I know it's not SD but I'm almost positive LUXO follows suit. In TunerPro it appears to be a 6 data point table, size = 2 byte (16bit) LSB first floating point output. The output range with conversion is 0 to 32 Hg and 0 to 256Hz.

I looked hard at using a SD ECU for boost unfortunately Im not smart enough to do it. It would be nice to have a hack to re-direct the transfer function and allow the use of a voltage output MAP. Problem being you need to sacrifice an input. I figure the EGR position sensor would be a good candidate or possibly the ACT since it's impact seems minimal.

Using a volts MAP on EEC is only going to get you 10 bits of resolution.

It would be possible to code MAP as 16 bit reslution but the real limit is how many bits of resoltion a frequency MAP will provide to the EEC. The lookup function would only need two data pairs for a linear MAP transfer. On curved MAP transfer more data pairs would help reduce interpolation error.

John....my knowledge is very limited in the nitty gritty of ADC processing so Im not able to add or make any kind of useful comments. I can say that the voltage 3 Bar MAPs are linear and you can likely get away with two data points. I personally prefer a minimum of three, the third being in the middle representing zero. Thats how I have mine defined for use with BE logging through the EGR input.

In GAHJO.....how low in Hz does it read during boost? If I'm thinking correctly it is the lower frequencies representing atmosphere to positive pressure that is the issue with the SD Map. It can only read to zero Hg (equalibrium) I'm assuming GAHJO runs 0 to 256 Hz except somewhere around 128 Hz represents the real world zero Hg threshold regardless of how it's defined in the strategy numerically.

In GHAJ0, about 150Hz for the atmospheric crossover point.
See attached for MAP transfer.

The other thing that might be going on with SD bins, is that the frequency limits how often the MAP value can be renewed. For 100hz it is 10mSec from pulse to pulse. Whereas ADC would be less limited to faster loop time- background or foreground depending on how it is coded.

A good understanding of the underlying cause of why SD are converted to MAF, is needed, before implementing a SD work around or improvement.